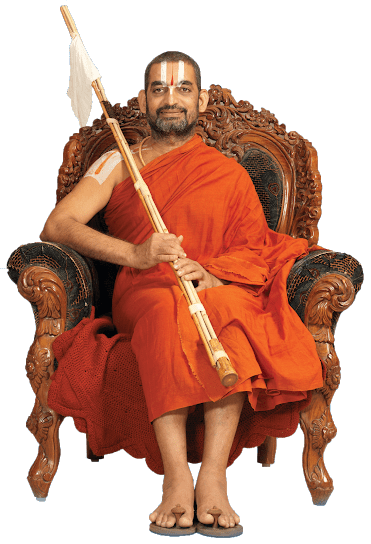 The Crusader of Peace His Holiness Sri Sri Sri Tridandi Srimannarayana Ramanuja Chinna Jeeyar Swamiji was born on Deepavali day, the Festival of Lights, on 3rd November 1956 at Arthamur Village near Rajahmundry in the State of Andhra Pradesh, India. Born to pious parents Sri Venkatacharyulu and Srimathi Alivelumanga Thayaru, He had His early education in the Oriental School, Gowthama Vidya Peetam Rajahmundry. It was the call of the Divine that made the young Srimannarayana Ramanujacharyulu to take up the ascetic order of JEEYAR(Lion) at a very young age of 23 years. Today He is reckoned very high among the monks of the India and abroad as the pioneer and Crusader of Peace. We have heard several stories and legends about God incarnations, Godman, and Acharyas in the past, but very rarely can we come into the living presence of divinity like, His Holiness Tridandi Srimannarayana Ramanuja Chinna Jeeyar Swamiji.

Monkhood: From the age of 23

HH Sri Swamiji is ever cheerful, ceaselessly active and is unmindful of His bodily comforts but always concerned about others welfare. Sri Chinna Jeeyar Swamiji radiates hope and joy wherever He goes. His discourses are profound, given in a language even a child can understand. He comes down to the level of the audience, who is swayed by the rhythm of His language and are enthralled by the beauty of His diction.

From five in the morning till midnight or even later, Swamiji is busy spreading the message of Vedas, Upanishads and messages of great seers tirelessly. He never says ‘no’ to people who want to see Him even at midnight. He is unmindful when it comes to attending to His needs but very active in attending to others’ needs. Such Swamijis are rare, and people who have met Him are blessed indeed.

For the inquisitive, He is an unparalleled spiritual teacher; for the intellectuals, He is an erudite scholar and philosopher; for the suffering parts of the world, he is the ambassador of peace; for the grief stricken, He is an ever-helping and inspiring leader, an eloquent speaker, a reservoir of divine qualities; and a uniquely distinguished representative of world’s most ancient but ever fresh Vedic knowledge and practices.

He is the embodiment of rare virtues, an epitome of boundless love for humanity and a holy saint with deep intellectual and spiritual sensitivity. He shares a deep concern and compassion for a society which to such a large degree lacks real spiritual dimension. Acharya is one who practices first, and then preaches. Sri Swamiji exemplifies what He preaches. H.H. belongs to such a highly esteemed line of Sanyasis and monks of the followers of Sri Ramanujacharya, called Jeeyars.

Any devotee can observe excellence in all aspects of His living. Right from Swamiji’s tidy dressing, His refined way of speech, unsurpassable perfection in Sri Vaishnava mark on the forehead, the affection in the way Swamiji addresses people in general, the elegance in the manner of His distributing thirtham, the lucidity and potency in His speech that can uproot ignorance in the receptive… everything can be conspicuously observed and learnt from. At the same time, He is the embodiment of detachment and renunciation. He is beyond any influence of the material world and its properties, “gunas”. His presence permeates a strange feeling of divine happiness and peace in everyone around. Every morning, it’s an inexplicable joy to see the glowing face of Swamiji. Swamiji wants to inculcate in our people, young and old, awareness of our heritage. He is always on the move most of the time meeting people and listening to their worldly and spiritual problems. Devotees get relief by just looking at His radiant, ever smiling face. His cool look cleanses our mind and raises our sight from the mundane to the divine. Blessed are those who have come under the influence of the revered Swamiji.

This is a humble attempt to capture a droplet from the ocean of H.H’s activities